What is the Bicep?

The biceps is located in the front of the upper arm. It’s main function is to bend the elbow and rotate the arm (supination). There are two tendons that make up the biceps, the long head and short head. The short head attaches to the coracoid (part of the shoulder blade) and is rarely injured. The long head of the biceps attaches to the superior glenoid (shoulder socket) and can be injured in a number of ways. The long head can dislocate or subluxate, which often occurs in association with a tear of the subscapularis tendon (rotator cuff muscle). It can pull off the attachment site on the glenoid, also known as a SLAP tear. Lastly, partial or complete tearing of the biceps tendon can occur.

How a Bicep Works 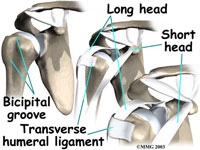 The biceps muscle has two origins at the shoulder:

The long head of the biceps tendon is in close proximity to the rotator cuff tendons and is frequently affected in rotator cuff disorders. It is a common source of shoulder pain. Biceps pain can occur from tendinitis (inflammation of the tendon in the bicipital groove) or tendon tears.

Bicep tendonitis is the inflammation of the long head of the biceps. Common symptoms include arm weakness and pain in the front of the shoulder. In its early stages, the tendon becomes red and swollen. As tendinitis develops, the tendon sheath (covering) can thicken. The tendon itself often thickens or grows larger. Occasionally, the damage to the tendon can result in a tendon tear, and then deformity of the arm.

If you tear the biceps tendon at the shoulder, you may lose some strength in your arm and have pain when you forcefully turn your arm from palm down to palm up. Tearing a tendon isn’t like breaking a bone, you may still be able to move the muscle, it will just be weaker. Most of the time, people can still function with the tear, and only need medication and physical therapy.

Biceps tendon pain can often be treated non-operatively with physical therapy and anti-inflammatory medications. If non-operative treatment is unsuccessful, arthroscopic bicep surgery treatment may be considered. The biceps tendon can either be released from its insertion (tenotomy) or released and secured in a new location on the humerus bone (tenodesis). These procedures can be done on an outpatient basis.

Shoulder surgeon Samuel Koo, MD, MPH specializes in the treatment of bicep tendon conditions in the Seattle area. If you have any additional questions about bicep tendon disorders, call Dr. Samuel Koo at (425) 823-4000, or request an appointment through our secure online form.